Waylan Daniel, aka Nathan Palan, is a music composer, multi-instrumentalist, band leader, and vocalist originally hailing from Janesville, Wisconsin. He has over 20 years musical experience as a full-time musician, balancing performing and writing music with such bands as Electric Automatic, The Last Nites and Hometown Sweethearts, scoring music for films, and teaching preschool music classes. He graduated from City College of New York in 2019 with a Bachelor of Music in Sonic Arts. His music has been featured in movies such as “Instant Family” starting Mark Wahlberg, the documentary on film maker/ dada artist Hans Richter “Cinema and Sanctuary,” the short film “Blood Lineage,” as well as the off-Broadway play “Lions Don’t Hug.” He currently resides in Brooklyn, New York with his wife and son.

Nathan Palan, (aka Waylan Daniel), is a musician, composer, and the producer of This Band Could Be Your Food, a podcast combining music history with food recipes.  He is a member of The Last Nites, Electric Automatic, Waylan St. Palan & The Magic Elves, Hometown Sweethearts, and The Dark Streets 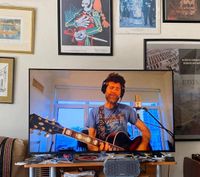